Because capitalizing on love is what February 14th does best! Voila five quotes all about l’amour…

“I have something I need to tell you,” he says. I run my fingers along the tendons in his hands and look back at him. “I might be in love with you.” He smiles a little. “I’m waiting until I’m sure to tell you, though.”
– Veronica Roth, Divergent

“As he read, I fell in love the way you fall asleep: slowly, and then all at once.”
– John Green, The Fault in Our Stars

“I am nothing special, of this I am sure. I am a common man with common thoughts and I’ve led a common life. There are no monuments dedicated to me and my name will soon be forgotten, but I’ve loved another with all my heart and soul, and to me, this has always been enough..”
– Nicholas Sparks, The Notebook (Because who does cheesy love stories better than NS? No one. That’s who.)

“You love me. Real or not real?”
I tell him, “Real.”
– Suzanne Collins, Mockingjay

“In my arms is a woman who has given me a Skywatcher’s Cloud Chart, a woman who knows all my secrets, a woman who knows just how messed up my mind is, how many pills I’m on, and yet she allows me to hold her anyway. There’s something honest about all this, and I cannot imagine any other woman lying in the middle of a frozen soccer field with me – in the middle of a snowstorm even – impossibly hoping to see a single cloud break free of a nimbostratus.”
– Matthew Quick, The Silver Linings Playbook 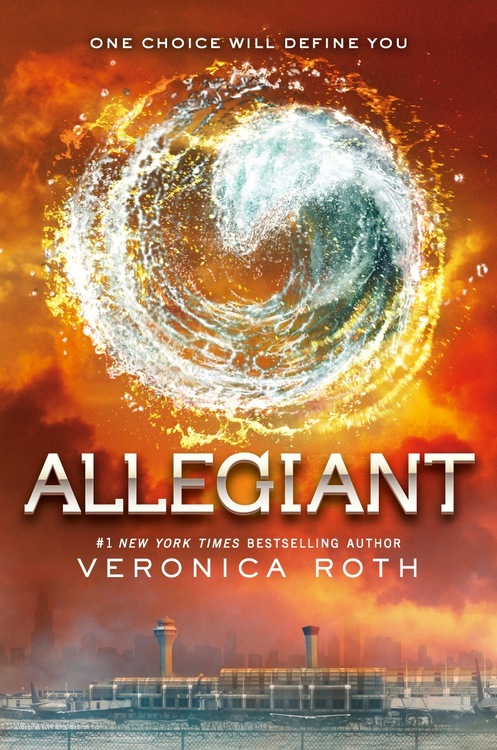 After revealing the truth about the society in which she lives, Tris Prior finally escapes to the world beyond the fence only to learn that despite everything she thought she’d discovered, things are still not quite what they seem.

That seems like the vaguest possible description for this book and there’s good reason for that. Let me start by saying I was beyond excited to read this last book in Roth’s series, I loved Divergent and Insurgent and because I’m a giant nerd I may or may not have counted down the days to Allegiant’s publication. I prepared myself for the usual two to three days of ignoring everything in life but the book and devouring it as I’ve done in the past. But that didn’t quite happen. I don’t want to say that I didn’t like the book because that’s not true. I’m glad to have experienced the completion of Tris’ story, I’m happy that Veronica Roth took some chances and made some stylistic changes (namely the dual perspectives between Tris and Four/Tobias) but I can’t help but feel that this final part of the story lacked the ingenuity and ease of the first two. To be blunt, it was a little all over the place.

The dual perspectives was a great add-on to the story mostly because Four is a character that you want to know more about. He’s just as integral to the story as Tris and it was nice to see his point of view because it helps to put things into perspective. It also makes you, as the reader, question whether Tris is always right. I liked that. Instead of having us blindly follow Tris, Roth gave us reason to doubt and question her motives – adding a level of complexity to the story that wasn’t there before.

I love the relationship between these two characters. I love that they are both so flawed and that they are constantly making mistakes but that they always find their way back to each other. I found it incredibly touching when Tris (in chapter 36) comes to the realization about relationships and having to forgive over and over but that it is a choice you make. I thought it was an incredible show of vulnerability and the most human she appears in this last portion of the story.

There’s been a lot of disdain, incredulity and rage all over the net about Roth’s decision to kill Tris. I have to say I don’t know why – the character always had a SUPER death wish. I mean in a way it was kind of her major character flaw. Tris Prior definitely suffered from a Messiah complex. In her attempts to always do what was right, to save other’s from the evils around them she was always willing to make the “ultimate sacrifice.” I mean in Insurgent the girl willingly allows herself to be led to her imminent death. I don’t even know how many times she ends up being shot through the series but it’s a lot. Her death was pretty much always in the works. It was clear she was not going to get her happily ever after. And I’m okay with that.

What I’m not okay with is the somewhat of a hot mess Allegiant turns into. I desperately want to love this final book. And though I commend Roth for going against the grain, for not being afraid to kill off her protagonist (a character whom no doubt she loved dearly) the impact of Tris’ death does not hold the same weight as say Dumbledore’s in Harry Potter and the Half-Blood Prince. The major difference being that when it came to Dumbledore’s death Rowling had a point – it was part euthanasia but it was also integral to maintaining Snape’s role as Voldemort’s right-hand man and ultimately ensuring Harry’s success in defeating He Who Must Not Be Named.

In comparison Tris’ death seems almost unnecessary and sloppy. First – Tris is more than just a soldier, she’s a leader, a rebel and a revolutionary, and despite her anxiety about guns when it came time for her to get into the weapons room I can’t possibly believe she would have left her gun behind, regardless of whether or not she thought the possibility of encountering someone in the room was slim to none. The fact is there was still a chance. And Tris is not a character who leaves things to chance. Secondly, and more importantly, prior to this whole “sacrificial lamb” change of pace did she not go on about wanting to live? About recognizing the importance of life and fighting for a way of life that was free from division and autocrats? What purpose did that diatribe serve? Finally, I don’t care how much she loves her brother, he aided and abetted in leading her to her death. And he did so with little remorse. He even acknowledges that his willingness to sacrifice himself (to break into the weapons room) was because of his guilt not because of his love for her or anyone. (Perhaps this is just an example of my harsh stance on forgiveness for people who try to kill you.)

No doubt there’s a contingency of fans out there who are truly upset that Roth killed her main character solely because that’s kind of a big taboo in these types of stories. But I like to think that there’s an even larger group of fans out there who recognize the major holes in Tris’ “sacrifice” – namely that it wasn’t one. The fact is her death was poorly executed. Though I don’t think Roth’s intention was shock value, I think her point was muddled in its development.

There has also been a lot of debate about sacrifice vs. selflessness and whether Roth confused the two. I don’t think so – that Tris was certain she could survive the death serum suggests she wasn’t really being sacrificial. That she in fact did survive it only to be shot by David proves that she wasn’t making a sacrifice, she was just being Tris and taking another risk. Was she being selfless? I think so. Was she intentionally sacrificing herself? No, not at all. She knew she could survive the death serum. And she did. But I reiterate, why would she leave her gun behind? Is it possible that a part of her wanted this ending? I wouldn’t blame her if you know, she was just tired of everything. She’s only sixteen and look at what her life has been.

Where I think some creative liberties were taken when it comes to selflessness is with Evelyn. It’s strange that a character who was so hard, so determined to get her way, not afraid of using the death serum on her own people to maintain control of the city would just back down from ruling because her son promises her a relationship. That’s a little far flung. Talk about a deus ex machina. It’s weird that Roth didn’t blink an eye at killing off her protagonist but stopped short of all out war when it came to the city Tris was trying to save. It was all a little too easy.

I kept expecting that Tris would eventually show up, like it was a big ruse (for what purpose I don’t know) but still, when the epilogue started two and a half years after her death I had no clue what to expect. That Roth demonstrated that Tris’ death wasn’t in vain was important and needed. It was also great to see how the others went on to survive without her and make lives for themselves in the “new” Chicago. I also felt incredibly sad for Four. There’s a character who’s life is not one you would like to experience. If anything it was the effect that Tris’ death has on Tobias that got to me. I always felt that she couldn’t make it to the stories end. That any other life would seem out of place and unnatural for her. But Four has suffered and lost so much, it’s heartbreaking to think that after everything he has to lose her too.

That the final thoughts in the book come from him and from a place of hope within him is comforting for any fan who invested in Tobias and were heart broken at all he has lost.

Of the three books in the Divergent series Allegiant is by far my least favourite. Though I commend Roth for making hard choices and going against what was expected I can’t help but feel that the overall point of the story gets lost in a lot of excess, that there are too many holes and most importantly that she didn’t go far enough to make the loss of Tris have a strong enough purpose.

Despite all the criticism Roth is an exciting writer and this series is a great addition to the YA Dystopian canon – I look forward to whatever she comes up with next because really she can only get better.

(Also it’s quite possible six months from  now when I sit down to re-read this my thoughts will completely change, in which case I promise to acknowledge that fact.) 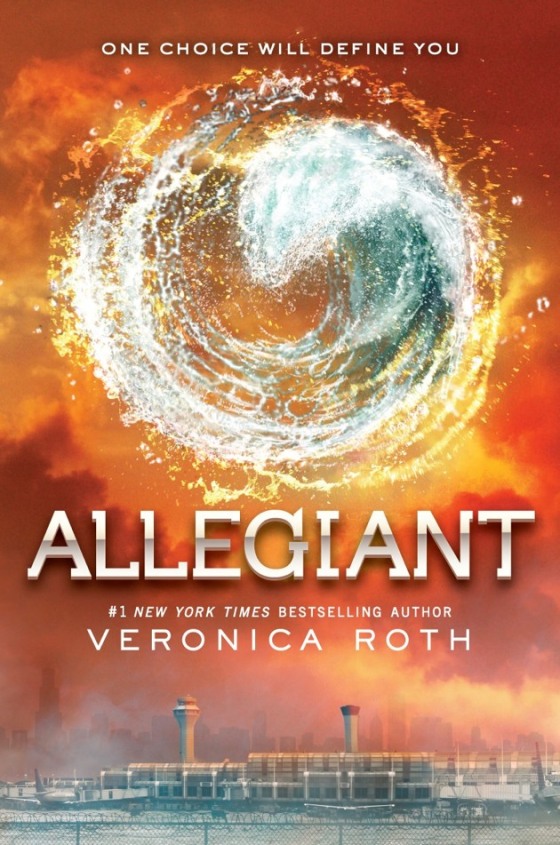 Every time I read anything about Veronica Roth’s Allegiant I become such a fan girl it’s scary. Regardless thank you entertainment weekly for this.

"Words, words. They're all we have to go on." - Tom Stoppard, "Rosencrantz and Guildenstern Are Dead"